More than a badchen, Yoely Lebovits is known throughout the world for his unique mix of entertainment, comedy, and spirituality. A star in the Hassidic world, he shines bright to illuminate all halls of theatre and performance.

A badchen is a Jewish comedian with scholarly overtones who entertained guests at weddings among the Ashkenazim of Eastern Europe. Today they are found in all countries with Chassidic populations, including the United States, performing and inspiring millions.

The badchen has to be able both to provide the energy for a party before and after the ceremony itself and also to make the transition to a more serious tone immediately before the ceremony. To this end his comedy is not of a slapstick variety but rather verbal with many intricate Talmudic references and in-jokes. 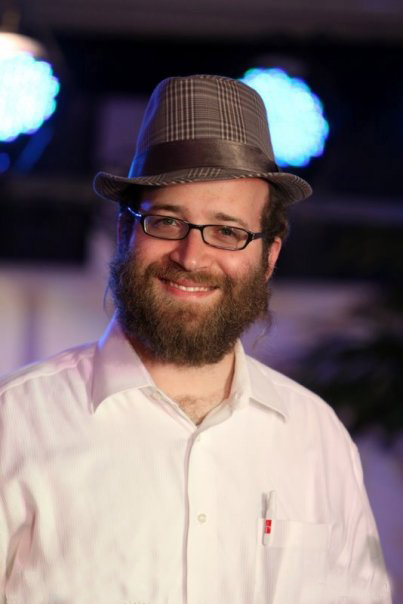 Yoely Lebovits or Pester Rebbe as some call him, is a popular figure around the Chasidishe Velt. One of his very funny acts is his imitation of Hungarian characters, which earned him the name Pester Rebbe, implying that he is the Rebbe of Pest.

Yoely has been entertaining at Jewish events since 1997. It started with impromptu performances at friends’ weddings and simchas. Within a short while, he found himself receiving the super-star celebrity treatment within the Chasidishe community, becoming the most sought after Comedian for Yiddishe Simchas.

One of his first comedic acts on stage was on the play “Hamaloch Hagoel” directed by famed Director Shlomo Perl and Ari Frankel of AF Productions, where Yoely kept the crowd (and the actors) in stitches.

Yoely’s act was featured in many Albums thereafter. In 1999 Yoely appeared on “Purim Y2K” produced by Yochi Briskman, that was followed in 2004 by “Purim Station” together with veteran comedian Harav Yankel Miller. Yoely has been appearing on many Purim tischen, entertaining thousands of people and Admorim alike. Communities such as Satmar, Klausenburg, Nikolsburg, Spinke, Burshtyn, Sekulen, have reveled in his antics.

Yoely’s talent is multi-faceted. The humorous jokes and imitations aside, he is beloved for his musical performances as well. From the many old Yiddish Classics, to heartwarming Carlebach songs, Yoely has been on stage with the contemporary Jewish singers, such as MBD, Lipa Schmelzer, Avraham Fried, Cantor Moshe Schulhoff and even conducted countless of Carlebach kumzitsen.

As of now, Yoely has been hired to entertain thousands of parties, dinners, weddings, sheva brachos and events all across the globe. Yoely has regaled audiences in America from the East coast to the West. Also, audiences around the world rejoiced in his company, as he has traveled to Canada, UK, Belgium, Israel, and even to remote countries like Scotland, Spain and Greece.

Yoely keeps his guitar in the trunk of his car, so it’s always at hand for him to cheer up anyone. With soft strums, he infuses words of wisdom and encouragement in his act, like his inspirational hero, Reb Shlomo Carlebach Zt”l. Yoely is a steady visitor of the area hospitals and homebound, or to children with special needs.

Welcome to the Pester Shteibel

Known the world over, the Pester Rebbe is one of the most beloved characters of Yoely Lebovits.

After years of being the Rebbe in Pescht, the Pester Rebbe has given us the priviledge of settling here in with us in New York. Never forgetting his roots and heimishe Hungarian culture, the Rebbe has brought with him the taste many Jews have lost of forgotten. The essense of Hungarian Yiddishkeit filled with laughter and tears, he keeps spreading his message all over the United States and the rest of the world.

From sharing tales of the alter-heim (homeland), to teaching Hungarian to our children, the Pester Rebbe has the power to inspire Yidden of all ages and backgrounds. Always with a schmeichel (smile), he has his audience in stitches throughout his performances. His performances include a wide array of stories, to songs of old, along with hilarious references to both the past and the present. We can learn a lot from the Pester Rebbe, and what better way to learn to truly laugh than to become a Pester Chussid today.

To recieve updates on new CDs, performances, and appearances fill out the form to the right.

A small collection of videos and stories showcasing some of Yoely's performances.
Enjoy and L'chaim!

Ringling Bros. Barnum & Bailey Circus together with the "Posheter Yid" Lipa Schmelzer at the Prudential Center in NJ.

the front cover of "Der Blick" together with an insightful interview.

As seen around the world!

Email us at badchen@badchen.com or call the number below to inquire about bringing Yoely to one of your next engagements / celebrations. You can also follow Yoely on all the social media sites linked below.